“Uttar Pradesh was once seen as the land of youth, of revolutionaries. But the truth is Uttar Pradesh today is the land of employed youth; the biggest in India” expresses Tarun Yadav, a student in UP, with much pain.

Another student Tousif Aslam, who is differently-abled, shares that the youth are asking for jobs but the politicians are busy turning Hindus and Muslims against each other.

BBC India pointed out that as of December 2021, only 12 million (out of 70 million) youths in UP  got jobs, and this is causing widespread misery among the youth, there.

Indian National Congress leader Rahul Gandhi shared this video along with a Tweet on when the voting for the sixth phase of assembly elections in Uttar Pradesh was underway on Thursday.

In the Tweet, Rahul expressed that unemployment, inflation/price-rise and social unrest are the key issues before the country, and there is anger among the youth due to this, but the prime minister does not even talk about them.

“Unemployment, inflation and social unrest are key issues before the country today. Due to this, restlessness and anger is increasing among the youth, which is a big problem in itself. Far from the solution, the PM does not even talk about them,” he said in a tweet in Hindi. 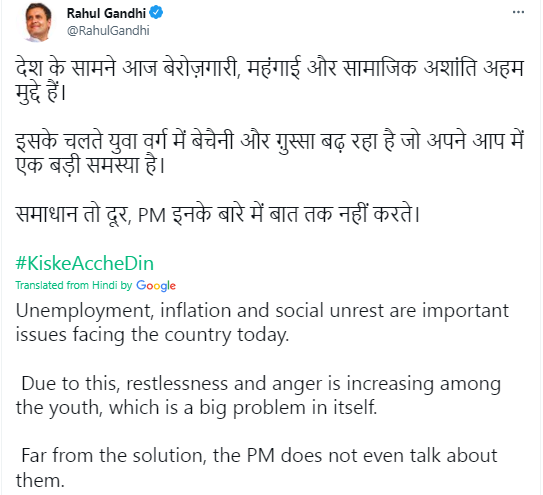 Rahul Gandhi has been trying to draw the attention of Modi-led Indian government over these matters for a long time. In, fact Rahul has not only been talking about the issues but he also has been telling how solutions could be provided.

In an interview with CNN News 18 in 2018, he said that the government talks about growth and percentages but India is simply not concentrating on job creation.

He suggested that India should open up banking sectors to Small and Medium Businesses, provide support to these organizations to help them become big businesses, and continue to support them. He also said that government has to find ways to put technology into agriculture, link agriculture with industrial systems. Rahul opined that such things are not happening in India.